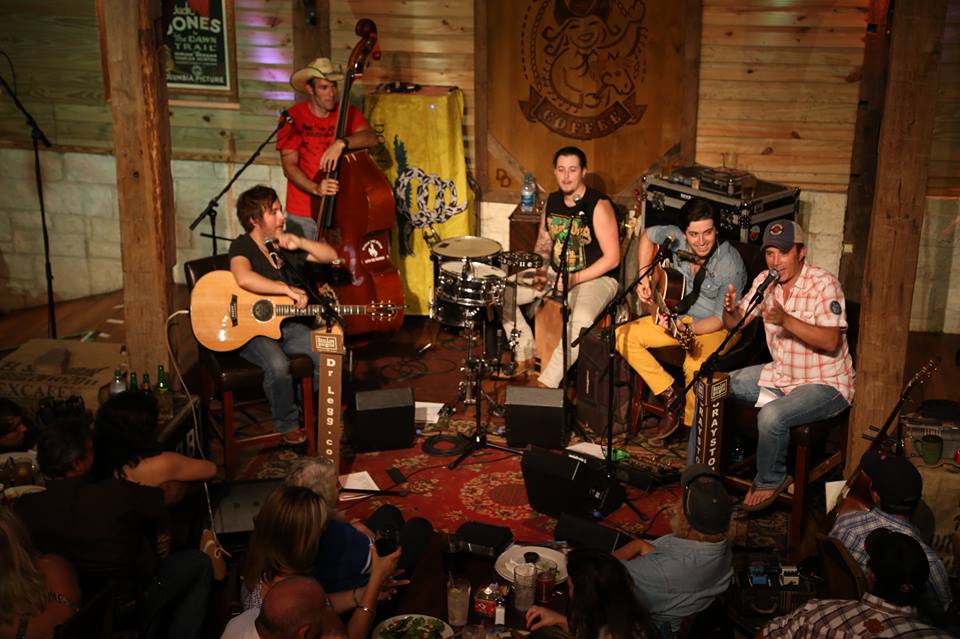 Take three country boys from El Paso, add in a “professional” skateboarder/farmer and give them something to bang on (possibly a wood box held together with duct tape) and you’ve got an electric mix of musicians who rocked the house at Dosey Doe. The Dirty River Boys, comprised of Travis Stearns on percussion, Nino Cooper on mandolin, Marco Gutierrez on guitar, and Colton James (CJ) on upright bass, are known for their highly-entertaining live performances and they didn’t disappoint during the taping of their episode on Real Life Real Music.

The ‘Boys kicked off the night with their song “Union Painter” about a proud but homeless man whom Nino met while working a community service project. Nino said the man’s background as a drifter who would go wherever the paint jobs took him as long as they offered him Union wages, inspired the meaningful lyrics about a difficult life and struggle with alcohol. The guys then asked the crowd’s permission to “get loud” as band mate Marco told the story of the song “Dried Up” about a fear he has of one day not being able to come up with new lyrics, a stress that many songwriters experience. During this performance, the group showed their true colors as they got loud and rowdy on stage, spinning their instruments and really getting down and dirty.

With the energy in the room cranked up, they played two unreleased songs called “Evergreens” and “Desert Wind,” then told the story of how the group formed. Travis first met Nino and realized they had the same passion for music, but it wasn’t until they teamed up with Marco, who quit his day job and moved back in with his parents to pursue music that things really started to take off. CJ joined the group about a year later and the band started touring non-stop, making a name for themselves and becoming well-known for their high-energy performances and leaving their hearts on the stage every night.

The title track from their latest album, “Science of Flight” has special meaning to Nino. It’s about looking at a floating feather that represents finding what matters most to you and following it with all your heart. He wrote the lyrics during a time when he was out of the music scene for a while and it is what made him recommit himself to his passion.

The group then played a couple songs written by Travis – “Lookin’ For the Heart” which is one of his favorites and had the whole band and most of the audience on their feet clapping along, and “Another Night” about a musician he dated who wrote “mean” songs about him after their breakup. All four ‘Boys joined host Kyle Hutton as he played his song “Shakespeare” and it sounded like Kyle had been a part of the band the whole time, something Travis says is what makes their group so great. They never practice and when they have a new song, they get together about three minutes before the show to discuss how they’re going to play it. It usually takes about four live performances before they get it right!

At the end of the night, Kyle said he was going to leave the stage to give the band some space to get wild, and they sure did! “Boomtown,” “Six Riders,” and “She” got the audience dancing, clapping, and jumping around, just like the guys on stage. The amazing energy didn’t stop when they finished their last song, “Raise Some Hell” because the crowd cheered them back for an encore of The Rolling Stones’ “Honky Tonk Women.” At that point everyone on stage and in the audience was exhausted – just another night at a Dirty River Boys show!