A Night in Wade’s World 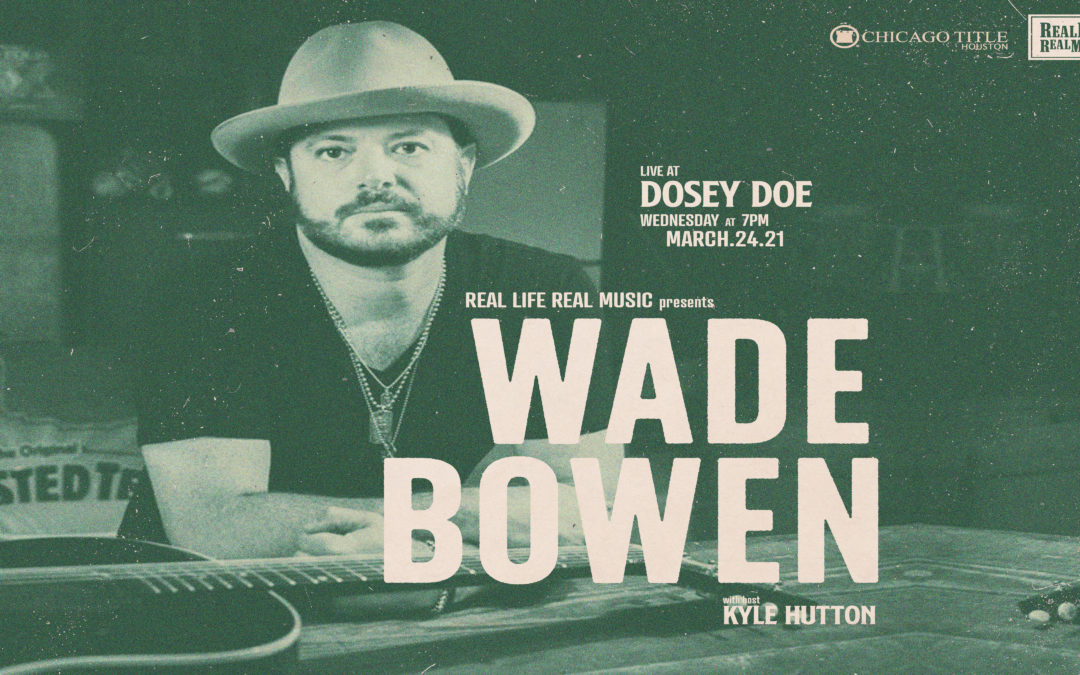 What a special night we shared with Wade Bowen at Real Life Real Music Live! He has been a long time friend of the show, and is one of the purest hearts in the Texas country music scene. We truly enjoyed getting to catch up with him and hear how the pandemic has been treating him, as well as experience stripped down performances of all our favorite songs!

Bowen kicked off the night with one of his biggest hits (and one of his most happy tunes), “Sun Shines On a Dreamer.” In response to the hope this song instills, Wade reflected on what he learned about the relationship between music and people over the course of the pandemic. “What I’ve learned through playing music is that no matter what good or bad is going on in the world, people have to have music. It doesn’t matter if it’s a wedding or a funeral, they want music there. It’s a part of our hearts and souls.”

As many fans know, during quarantine, Bowen hosted a weekly virtual concert every Friday evening, called “Wade’s World.” It featured special guests and gave musicians an outlet to practice their craft, and an opportunity for fans to experience live music. In fact, Kyle and his wife would sit out on the porch each evening and watch the show! “I had to get used to the awkward silence after a song ended. It’s weird, because when you play virtually, people can’t smile back at you when you’re done!” said Bowen.

The team at Real Life Real Music actually got the chance to work with Wade in person during quarantine, during the recording of the Hold My Beer Vol. 2 album release livestream with Randy Rogers, filmed at the famous Cheatham Street Warehouse. This album was in the works for a while, and the release date ended up falling in the middle of quarantine. However, after much deliberation, the friends decided to release as scheduled, because they knew how much their fans needed music at the time.

Bowen also opened up about the early days of his career, namely the album that changed everything for him, Lost Hotel. It took Bowen over 3 years to finish this career defining record, “I would record five songs, and then I would run out of money and have to wait,” he explained. After breaking off from Wade Bowen and the West 84, he knew this album had to be great. He admits that his goal for the record was to prove himself as a songwriter to other artists, hoping tour opportunities would come his way. It seems like the hard work was worth it!

At most #RLRMLive shows, our host and singer-songwriter himself, Kyle Hutton performs one of his own songs, often drawing parallels to a song or topic the artist has talked about. Bowen had just finished playing a beautifully heartbreaking song, “Before These Walls Were Blue,” talking about the beauty and pure love that you experience with your children. “I felt a lot of pressure to write [my kids] a song that they’re going to keep and remember forever. But a sense of calmness came over me when I realized we learn way more from our kids than they do from us.”

In response, Hutton talked about his experience with his two young adoptive daughters, and the rewards and struggles his family faces on a daily basis. While having children can sometimes feel difficult, it’s so important to stop and be present in all the little moments, and let them remind you what living is all about. He wrote his song “Flowers,” based off a story of his two little girls picking the buds off of mom’s Magnolia tree.

Once again, we’re so thankful to everyone who was part of making this amazing show a reality, and to our audience who came out to show support! If you couldn’t make the show (or simply want to relive it), watch out for the full video podcast episode coming SOON to our Youtube channel!